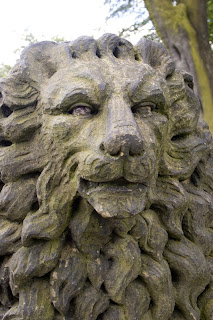 Haigh Hall
THE FEEL GOOD FACTOR
13 sec improvement doesn't really tell the whole story as I felt a hell of a lot better than in last months race, In the May race I felt like packing on the first steep climb and I had to use all my mental will power to keep on going! This time I felt strong the whole way round. Starting in the woods the rain started as we set off up the one mile climb, one group pulled away from me and I found myself leading the second group, I didn't even notice the really steep section today, after a mile or so we went passed the hall and then tackled a short steep ramp before hurtling back down hill at speed, then there was a right turn and back up the hill again, slowly I started to pull back the tail enders of the group in front and be the top of the climb they were within pouncing distance! Just one mile of downhill to go, Rob tells me he ran this stretch in 4.48! I take out one runner then another as I get within the last 400m or so, A final sprint and I cross the line in the pouring rain in 23.31 feeling much happier than last time, I think I've turned a important corner in my running, for the better! Team mates Richard Shearer WON the race , Steve Wilkinson came 5th and Rob 'the chicken' Mcgraph finished 8th after his epic downhill assault, if only I could have finished faster the Team award would have been in the bag! As it was we had to settle for second, I'm hoping Barry's training will help me improve enough to support the team better next month!
Photo Haigh Hall Lion
Wed10th Haigh hall 4 miles 23.31, 18th place.
Thur 11th Easy run with Tess over the big sand dunes = 1.31
Fri 12th Easy run with Eddie and Tess, should have been 30 mins but turned into an hour!

Very impressive race, congratulations. Sounds like there is more to come from.

And yes, my hill repeats are straight out of Deek's training material (though some coach [not mine] did recommend them as well).

Thomas, in Lenton's interview with Deek for "Through The Tape", the hill repeats aren't mentioned as being at maximal effort... "Tuesday (afternoon) is hill repetitions and Rob totals eleven miles including warmup and warmdown".

Rick, now don't you go crediting Barry with that race! Good running. I'd love to run that pace for one mile!

I see him around town occasionally - I'll ask him next time I see him.

I like Peter Magill's idea of running hill repeats sounds less painful and if the guy can run 14 minute 5k's you can't really argue with him!

I think Deek's hill repeat style was more like Pete Magill's. I know Deek's were longer than 45 secs - they were about 600m.