My Next Race 'Through The Villages' The 'Through The Villages' is what I consider to be a true classic road race.
It's run over a challenging 8.5 mile hilly course, starting at the bottom of the first of five climbs and ending coming back down  that very first climb at break neck speed!
In 2009 when I started this blog I had what I consider to be one of my best all-time races, despite only finishing 19th in a high class field of runners.
I broke sub 6 min mile average pace, which for me I think was pretty epic :0]
See my report from 2007


through the villages 8.5 mile race Labels: Through The Villages Race

After two months off racing I .returned!
Paul gave me a lift down and we met
with Clare before the start for a warm up.
THE RACE
I was quite amazed to find myself in the lead after 200M but soon I was passed by the guy who won the race.
Soon after his two team mates slowly passed me and then I was in fourth place!
Onto the first hill, I was feeling strong!
Over the top and a nice long downhill to the forest.
Ben's mate Charlie overtook me and then I was in fifth!

Forests, Mud and more hills followed on the second lap.

LAP TWO
A very attractive female  marshal asked me if I was OK as I ran into the forest for the second time.
I said really good!
Then looked down at my leg and saw blood poring out of my right knee!
No worries, I've got two pints of blood stored in my refrigerator for a top up! [ Sic Lance Armstrong Joke!].
Must of hit it on a thorn bush or something!

It's a fantastic course, very enjoyable and Paul Carrol and the Wigan phoenix AC have to be thanked for putting on this event for the last 10 years!


I was well happy to finish 5th after limited training.
Paul was 15th and Clare 2nd Lady and leader of the winning club ladies team! 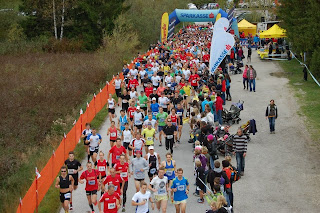 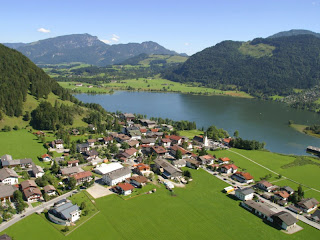 Altitude training as a fulltime athlete and my international debut (well there’s no harm
in having an imagination)
After an action packed summer in London my contract ended in the middle of September.
As I’m no longer in work I guess it makes me a full time athlete . Having been running
quite inconsistently over summer it was good to have the time to get back into a bit of a
routine. With a handful of steady runs each week and the odd bit of fartlek I managed not to
lose all of my fitness..
My only races since the London marathon had been a 1km leg at the end of a relay triathlon
and a club 5k on the road towards the end of summer both had gone OK but nothing
spectacular. After about 10 days of more regular training my first proper race back was at
the northern road relays heading straight back in at the deep end. I usually find I can push
myself pretty hard in the relays as I don’t want to let the team down and I ran again OK but
knew I was making hard work of it.
One of the wettest September weeks on record and the falling temperatures didn’t do
a great deal for my motivation. As the wind howled outside the window and I tried to
contemplate going out for a training run in the torrential rain, my uncle in Austria happened
to call to mention a half marathon just up the road from his house the coming weekend.
It didn’t take me much persuading to book a last minute flight and have a 6 day running
holiday in Austria.
This took me to the “Sparkasse Kaiserwinkl Halbmarathon in Walchsee” which seemed to be
sponsored by just about everyone in town. The weather was near perfect, cool and calm as
we arrived at the start alongside Lake Walchsee, a beautiful lake which sits around 2100
ft above sea level in the Tirol region of Austria; I thought that even if the race didn’t go
too well at least there would be some nice views. The course was 4 laps of the roads,
gravel trails and a short stretch on a grass field surrounding the lake. The race included
a team challenge where 4 runners each ran a lap and the total time was added to decide
the winning team. There was also a 2 lap quarter marathon and a Nordic walking event all
mixed together which made an interesting start. As the few hundred runners blasted off up
the road it was impossible to tell who was in which race.

Spot the Southport vest! Photo 1
After the first mile in 5:35, there were a handful of runners who were well clear and I knew
I wasn’t fit enough to stay with them if they were in the half marathon. I settled into a
comfortable rhythm and as we rounded the corner to end the first lap I realised that all but 2
of the runners in front were only doing one lap. I pushed on past the second placed runner
leaving one man in front who had around a 15second gap. I kept him in my sights round
the second lap as I pulled clear of the 3rd placed runner but as we rounded the second lap
he stopped and helped himself to a drink and a banana. It took a few seconds to realise
that he was only doing the quarter marathon leaving me in first place with 2 laps to go. As
I rounded the third lap a smile of disbelief crept across my face as the DJ announced the
leader as “Johnson Ben aus Gross Britannia!” I held a steady pace behind the lead bike,
dodging my way between lapped runners and Nordic walkers which gave me something
else to think about as I ticked off the miles to finish a couple of minutes clear of 2 nd place.
The interview in German was another new experience and I had to really rattle my slightly
dehydrated brain to get a sentence or 2 of my best German out.
Results...
http://my2.raceresult.com/details/results.php?lang=de&page=6&eventid=11039&contest=7&name=Ergebnislisten%7CErgebnisliste%20MW%201%2F2%20Split&CertificateLink=1&format=view
Event website
http://www.grenzlandcup.at/sparkasse-kaiserwinkl-halbmarathon/

Garmin stats…
http://connect.garmin.com/activity/228505110
I can think of worse places for a run… photo 2
Although I wasn’t under any illusions that this was a world class field or anything it felt good
to get a win and the area was a great place to train for the rest of my trip. Although my
time was slower than I’d been through halfway at London earlier this year the course didn’t
really lend itself to a fast time. The event was brilliantly setup with a real effort to entertain
the spectators and families which gave a great atmosphere around the start/ finish area. I
picked up some different prizes including 1kg of spaghetti, breakfast cereals, recovery drink
powder, some chocolate, wine, champagne and 50 euros to spend at the power bar shop.
All very useful, however I don’t think it will be enough to stay as a full time athlete for long so
if anyone knows of any job opportunities I’d be very interested!

Since returning home I had a reasonable start to the cross country season feeling strong
throughout the race and a more promising run at the national road relays gave me
hope that I’m back improving again. Some great performances from the whole 6-man Southport
team put us in a respectable 30th position overall.
photo 3 back enjoying my running at the road relays as you can see from my face !?!?
Thanks for reading! Ben 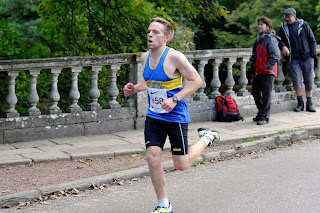 After winning the Tour de France seven times in a row, Lance Armstrong might well have been the greatest sportsman of all time.
Not only had he won the most coveted of all cycling races, he had done so after recovering from advanced testicular cancer.
Lance Armstrong maintains he has never used performance enhancing drugs.
He claims he has never tested positive in hundreds of drug tests.
Many who know him well now say he is lying.
"The doctor started asking Lance a couple of banal questions, and then boom, have you ever used any performance enhancing drugs? Lance, hanging onto his IV, rattled off EPO, testosterone, cortisone, growth hormone and steroids. My eyes popped out of my head."
Next on Four Corners reporter Quentin McDermott talks to people who worked for Armstrong, rode with him and some who raced against him. What they reveal will shock you.
http://www.abc.net.au/4corners/stories/2012/10/11/3608613.htm …
Posted by RICK'S RUNNING at 05:56 No comments:

Way Of The Peaceful Warrior

If your looking for a way to improve your running then I highly recommend you check out well known local runner and coach Rob McGrath's NEW website http://runyourpb.com/
Posted by RICK'S RUNNING at 05:00 3 comments:

Ramble On! And These Girls really Rock:0]

Man this weather is so crap!
Its rain after the rain!
I'm trying to focus on future races right now but my body says rest!
And so I listen and adjust my aims!
Next year is going to be EPIC!