I asked Niz to take a video of me running along the sea wall near Southport pier on a dull windy afternoon. I've been working at using Steve Magness's'Hip stretch/reflex mechanism' running method for the last couple of weeks.I can see that my knees and heel are coming up nicely without effort but I can see a few faults, my head is looking down and I'm bending forward at the waist, so I've got room for improvement!
it's really useful to have a video taken of yourself so you can see and work on your faults. 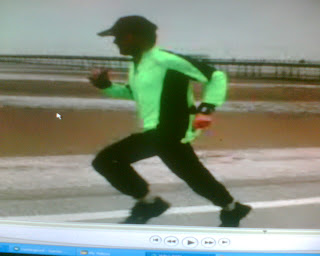 What do you think of Tess's running form?
Check out Steve's website and video's on correct running mechanics READ HERE
VIDEO 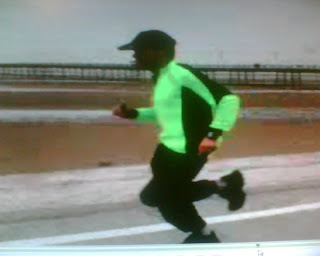 looking good Rick. I can't see that you're doing too much wrong.

Tess is smart she knows after the 2nd run where you're going to turn and she just waits for you.

As for Ewen breaking open the piggybank to buy some new runners, don't hold your breath. I've heard that, that "Piggybank" has an alarm system and Ewens long since forgotten how to disarm it!

Thanks Scott, I've heard that ewen's got some Aussie bank notes in pounds, that makes them older than 1966 !
yes tess is a sharp mutt alright :]
cheers Rick

Tess's form looks great - though I worry she's expending too much energy jumping up and down off the wall. :)

Your form's looking good too. Watch out London!

Yes, I'm saving my 1966 pounds for a trip to the old dart so I can show you old farts how to run!

Looks OK, although the s#!tload of clothes you're wearing makes it hard to see exactly. Tess needs to work on keeping the movement in a forward direction rather than side to side ;)