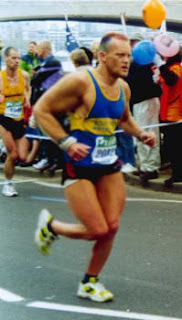 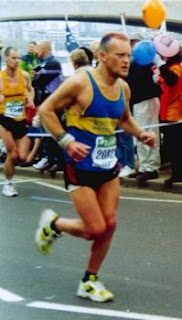 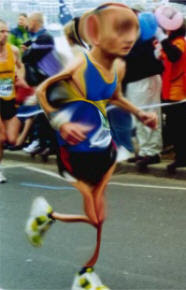 Once the dust has settled its always worth taking a look at how one could run faster and train better, I still want to get down to 2.45 and I think with a few changes to my training and life style its more than possible! Back in December I started to run using Jack Nirenstein's Gravity Running method, it has greatly helped me improve my speed while at the same time reduced aches, pains and injury problems. Gravity running has also improved my enjoyment of running and is the keystone that has given me back my enthusiasm for training and racing. The icing on the cake was buying a pair of Spira shoes they were the final piece of the jigsaw that let me run to within only 1 min 22 sec of my London Marathon time 10 years ago! My training for London also started in Dec using my own training ideas but I soon started to train using Mike Grattons training program for Runners World. I was really pleased with my steady improvement up to the Marathon but after reading this article I believe increasing my marathon paced tempo runs from 3-12 miles up to 12 - 22 miles will help me maintain pace in the second half of the marathon.
My biggest problem is my weight, after years of heavy weight training I have gone up from 10 st 10 lb to 11 1/2 stone, I feel that at 5 ft 10 in tall this is just to heavy to be a good marathon runner, I don't really want to look like an ectomorph but it might be worth it. This chart shows that I can run a marathon 54 seconds faster for every 1 pound I lose, so with a possible 11 lb to lose 2.45 seems more and more possible! And a added bonus, less weight means less impact hence faster recovery from training! So I have a new goal and plan to get there, what do you think, is 2.45 possible!
I would really appreciate any info you might have as regards your best running weight and how gaining or losing it has affected your performance!
CORRECT WEIGHT FOR RUNNERS
Cheers, RICK
Sat 2nd
Had a fantastic run over the big sandhills, running steady I finished just 40 sec down on my course record set back in 2005!
=1 hour 14 mins

I agree that the the most important training workout is specific endurance (i.e. training at target race pace). Intervals at 5k pace and even tempo runs at HM pace can't prepare the body for a marathon as well as longs runs at marathon pace.

As for the weight issue, it certainly makes sense on paper. I just wonder what reality would throw up. At 6' and 13st I could have alot to gain from shedding a few lbs. Best of luck with your next training plan.

Rick, we're the same size and pretty much the same weight as well. I gained half a stone after the Dublin marathon that never came off, and have now added another half since the Boston marathon. I hope to improve that situation before my next one, but on the other hand I'm not exactly a friend of dieting,

Thanks for comment Grellan,
I was reading about Seb Coe at 5.10 he was only 120lbs, his body weight was 20 % lower than normal. Steve cram weighed in at a slight 140lb and he was almost 6 foot tall, and these guys were short distance track runners!

Thomas, you look really thin on your photos, I don't like cutting back on my food either, But I'm thinking it might be worth it to have one last crack at 2.45 next year!

I agree. If you are 11 1/2 stone
you are carryng at least a stone
too much. In fact I'm surprised
you can get away with the Spiras
as generally race flats are
for them that weighs < 11 stone.
When I gave up the bike (80km
a day) I bloated a bit but now
I'm back to a fairly stable (10 1/2
stone) racing weight for 5'10" and
35 miles a week running. If it
helps -- I cut out dairy products
including chocolate but not cheese.
I had cut out bread but I travel a
lot for work and I eat a sandwich
every day now.

Thomas's extra weight could be
fluid retention due to trauma.
A spot of diuretic (beer, coffee)
is a big psychologically aid.


BTW the gravity running and all
doesn't seem to have made that
much of a difference for
the marathon. Your Blackpool
time is very good/much better
considering that in smaller
races you generally
have less people to work off.

gmc thanks for comment, The Blackpool marathon was found to be a shocking 0.75 of a mile short! my 2.48 time turns into a corrected time of at least 2.53.
Also the Trimpell 20 race was short last year, on a correct course this year I equaled 3 mins faster!
I was also some 20 seconds faster in the easter 4 mile and all my training times have been well up on last year!
Thanks for the details on your weight, I am definitely carrying too much upper body muscle but as a natural mesomorph I doubt I could get under 10.10
cheers Rick

I've been told by a few marathoners that your "ideal weight" for that distance is roughly your height in inches multiplied by 2. (so 140lbs for a guy 5'10'')

Rick - according to the article you posted, this would correspond to about 15% less than the average guy for that height, so the height times two matches up well w/ what your guy is saying in that article.

However, if I look at the best middle distance/distance runners, it would seem about 10-12% under the average is pretty common:

Thanks for comment Mike, cutting back on my upper body weight training and losing some muscle sounds more and more appealing1
Maybe a new line of p.b.s are waiting round the corner for a slim line RICK!!!

Rick, if you have "excess" weight - esp upper body, you'll definitely run faster if you lose it.

I reckon 2:45 is a goer, if you get the training mix right and get the right day.

You need to get off working nights. It disrupts the natural cycle of the body which tells more in the longer races.
Regarding your upper body size,you get plenty of exercise in your physical job at the moment.
I also think that if you can get within 5 to 7lb of the doubling your height in inches in pounds you can break 2.45 for the marathon. This would give you a weight of around 10.5 stone so ideally you need to lose around 14lbs (a stone) to reach your potential. I know you don't eat a great deal so it's the heavy muscle weight, not fat that is keeping your weight up.
All easy for me to say!