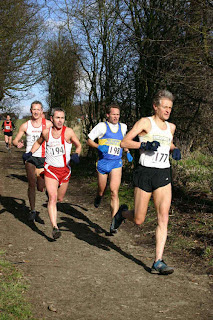 PAIN AND THE GLORY ON THE STANDISH TRAIL
warmer windy weather greeted us for the start of THE STANDISH HALL TRAIL RACE, run over 2 laps with 4 climbs this race seems in my mind to be tougher and more intense than even the Parbold hill race.
On the start line was Richard Carey a regular top ten finisher in past races,richard told me he had been recovering from injury, so when he shot off at the start like a scalded cat i wondered if he was bluffing ! After 3/4 of a mile of cobbled path we reached the first hill, which reared upwards into the distance. slowly a pulled Richard back and came along side him as we reached the summit, the look of pain etched across his face told its story and Richard waved me passed. next is Brian davey, back in top form and showing his fell running strength
Not far behind Tracey Peters was having the run of her life, showing the selectors that they had made the right decision in picking her to represent merseyside at the national X/C champs. Eddie was running well until he felt his calf muscle pull as he made his uphill assault, Eddie carried on for another 3 miles until the pain became to much.Margot Bowker was the next victim to pull out after her shoe cut deep into her heel reducing her to a painful limp.Liz stanfield looked strong as she led Carole James followed shortly by a very confident looking Sarah Reynolds [ sarah has been training hard on the hills of parbold under the watchful eye of club coach STORMING NORMAN and it seems to be working wonders ].
after the steep hill we plunged downwards at speed heading towards the woods,I was starting to wish i had road shoes on at this point as my old fell shoes felt like two stiff planks strapped to my feet, each uneven surface had me swaying from side to side like a drunken sailor out at sea.
On reaching the woods we all went off course taking in a extra long loop of at least 8 tenths of a mile,it seems that some mischievous woodland creature, maybe a elf or upset fairy had moved the tape ! some how we all made it back onto the correct route to finish our first lap.
I was now in 9th place as we made our way up the 1st climb again and feeling pretty good. over the hill and then back down dale onto the woods again,this time we all went the correct shorter loop through the woods and then up a steep ascent dodging in and out of the trees to test the legs to the max, we then reached the hardest part of the course a uphill track over a muddy field. i lose one place here just before we turn left for the final 600 m. Rob Mcgrath shouts encouragement which gives me renewed energy, i reel in the guy in front of me and then sit on his shoulder to keep out of the wind, a sudden gust blows him sideways across the uneven surface,he stumbles and a take my chance with a rapid acceleration that takes me clean away and gives me 9th place,14 places improvement on last year and in a bigger entry of runners.i also won first v 45 proof that high mileage pays off. next in is a reborn Brian Davey finishing with a brilliant 15th place 46.48 Richard carey battled on to finish in 30th 49.23 a brave effort ! Tracey Peters did a storming performance to finish 40th 50.57 a star of the future me thinks ! my brother andy bowker was next in but does not show on the results, maybe he sprinted in too fast for the time keeper to see! liz Stanfield had a great race with 58.45 and only one week after completing the parbold race. carole james had a solid run with 1.01.27 Sarah reynolds finished with a glint in her eye and a beaming smile to finish in a very respectable 1.09.07 sheila marshal once again put in a great run to take first lady vet 60 with 1.14.19
Norman marshal was full of praise for his girls after the race even breaking out into a smile!
Paul Carrol,race organizer was more than happy with the second biggest ever turn out for the race with 188 runners finishing the extra long 6.9 mile course.
After we had a relaxing pint in the hesketh arms pub and talked of our days battles on the standish trail, a fantastic fun day out for sure !
FULL RESULTS CLICK HERE
CLICK HERE FOR, JON'S SANDHILL 6, PAULS 20 MILE ROUND SOUTHPORT TRAINING RUN AND MORE ON EVERTHING 'RUNNING'.