Hill Sprinting Progress And A New Pair Of Saucony Hattori! 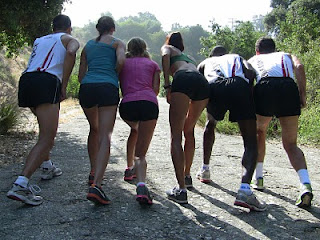 After finishing my short hill sprint session last night I decided to compare my times for the hill with when I last did this session-back in 2003!
Amazingly I'm running the hill just as fast now as 8 years ago!
2003 was a good year I set my P.B.'s for 4 miles with 21.31 and also 27.11 in a 5 mile hill race!
Not sure why I stopped doing the hill reps because they really help improve power-strength and stride, other benefits include boosting your growth hormones level by up to 40%, very useful for us masters runners as G.H. increases recovery, rebuilds muscle mass and burns fat!
Hill sprints are highly recommended by top Italian endurance coaches and by masters super coach Pete Magill.
I'm now into my fourth week of short hill sprints and feel like I'm getting stronger.

Just got delivery of a new pair of Saucony Hattori these shoes are incredibly light and very minimal and will be used for my up coming short races and maybe even the half marathon in a couple of weeks!
OK off for a test run :0]

MOUNTAIN RUNNING NEWS
Tom Owens continues phenomenal 2011 form at Zegama and finishes runner-up to Kilian Jornet by seconds, as Ricky Lightfoot suffers in the heat...
Click On Photo for MORE!

SOMETHING FOR THE WEEKEND?
SIZE MATTERS

Nice flatish soles on those shoes. Should make it easier to remove any dog shit!

You've put me in an awkward position by posting that large dick clip. If I don't make a comment you may think I'm a repressed homosexual and if I do you may think the same! So I'll just say nothing ;)

I think I'll leave Ewen to reply on your comment!
But if you dream of giant cucumbers and meatballs I'd be a worried Man!

Interesting shoes, haven't heard of them before. But I'll wait and see how I get on with the Kinvaras before going further down that route.

As you might have guessed I'm trying hard not to comment on that video. How am I doing? Oh ..

Thomas, I lot of runners rate the Kinvaras very highly.
The Hattori is extremely minimal, weighing in at a mere 4 oz.
it will be interesting to see how well they perform in a 5 mile race next week.
Hope your marathon goes well and the knee holds up!

I'll just say that I don't need to comment Rick.

I found the Kinvaras a tad narrow, but they didn't have a 14 at the local shop. Like the look of those Hattoris if they're wide enough. Good reminder about the hill repeats. I'm off to check out a local hill shortly.

I'd bet Canberra has less big hills than big dicks and they are, I'm sure, limited in quantity there!

The hattori is quite a wide fit Ewen.

A found a hill Scott. Not huge like the ones in Osaka but similar in gradient to the one Pete and Grace use.

Thanks Rick. I'll try a pair when I'm in the US.