EPIC RUN IN DEEP SNOW, A VOYAGE OF ONE MAN AND HIS DOG TOLD THROUGH VIDEO AND PICTURES!Long Run In Deep Snow

OH SHIT!
The snow came last night and lots of it.
You only ever grow as a human being if you're outside your comfort zone.
-Percy Cerutty
I tried to get to work on my motor bike but turned round after only half a mile, the roads were really bad, I ended up getting a taxi in.
i walked the 2 miles home this morning after a very hard night shift, the snow had continued to fall through the night, leaving a good 10-12 inch of the stuff, it was very hard to walk on the footpaths, best option being the flattened snow on the roads!
I passed a police car with a burned out clutch, the fumes still filling the cold air with toxic chemicals, just another casualty of the snow!
After 4 hours in bed I got up for my long run, I was meant to run with Paul but he didn't want to drive down to meet me [I don't blame him, the roads were very dangerous] so me and Tess set out alone across the heaviest snow Southport has seen in a long time!
It is quite rare to get snow here on the coast, so running in the stuff is quite novel, but hopefully it will soon melt away!
I had no problem with grip in my trail shoes but I had to pick my knees up high to clear the snow!
we went through the little nature reserve then the Velvet Trail, following walkers foot prints the best we could.
Then we got onto the sandhill 6 route.

It felt really hard pushing through the deep snow and although we were travelling at a very slow speed I had no trouble holding my heart rate at the correct endurance effort.
The snow got between my shoes and tights burning my ankles with cold.
My feet were fine, I'd applied Vaseline to my feet and toes which worked well to keep the cold and damp out.
I wore a hunters hat with ear flaps, thermal mitts, tights and a cycle thermal jacket which kept me warm in the freezing conditions.
My shoes were the Nike Red Rock Trail 2 shoes 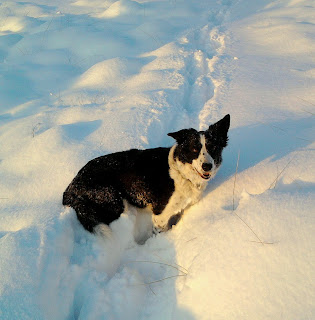 Poor Tess was up to her belly in snow at times and we both started to feel quite tired out.
At last we made it to the Big dipper and onto the Royal Birkdale golf club house then past the big grass mound at Hillside, families were having great fun sliding down the steep bank in the snow!
Last few miles we got onto the roads and started to pick up speed, finishing with 1 hour 50 mins.
One very tough run!
I felt a glowing sense of achievement once I got home, after all it would have been easy to have wimped out and given today's run a miss, I'm glad I didn't :]

Did you have to run in the snow today, did you make it through? 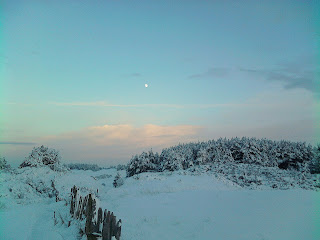 Wow!!!! That is dedication. I could do with doing the same but don't think my gear is quite up to the conditions.

Thats good going Rick espically after 4 hrs sleep. Have you herd about the Yak Trax pro for over your shoes their meant to be good. Like you we dont get much snow by the coast but got a good fall last night might get them Yak trax before I head out.

Good to hear someone else was out in the snow. Very impressive to get out and do nearly 2 hours.
I went out did a little over 5.5km in 30mins. Ran over to the R5K course and completed one & a half laps; the lower loop was knee deep and hard going. Even with the snow I didn't think it was that cold today (WTF!) Going out in just my shorts, single layer long sleeve top + gloves (no hat) got me a few comments from the wrapped up dog walkers and sledgers :-) Wore the Inov8s today but for tomorrow I think I'll cross train at the gym and use the treadmill.

Tess is enjoying her run in the 'snowhills'. Percy would love that! I've run in falling snow, but never through snow. It just doesn't get cold enough here. If it did, I'd cut my arms off if they got too cold ;)

Looks like Tess enjoys the snow as much as Sadie. That's a lot of it you got there. :)

PAUL, thanks.
ROB, yes I've heard of yak traks but some runners say they can fall off in heavy snow!
Stevie L
glad you made it out, yes the snow was really deep in places, hard going!
Ewen, lucky boy!
I'd be happy without ice and snow!
Scott, yep Tess loves the snow, far more than I do, I hate the cold, hurry up spring :]

Inspired by your snow running heroics, I myself have ventured out for my first snow run. tough on the ankles but ultimately the most rewarding and enjoyable run ever. thanks.